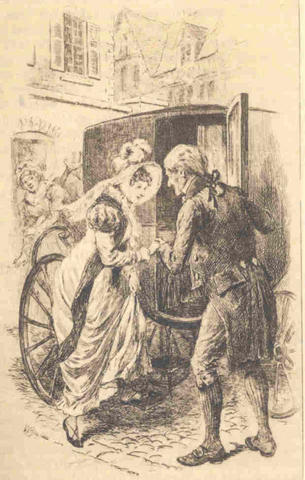 The landlady and others are curious to know the identity of Père Goriot’s splendidly dressed visitor. Sylvie, who had taken her basket as if going shopping, reported “Just imagine it! There was a splendid carriage waiting at the corner of the Place de l’Estrapade, and she got into it.” 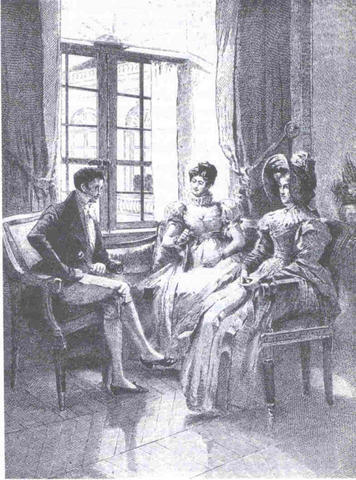 Shortly after Eugene de Rastignac arrives in Paris, he visits his cousin Vicomtesse de Beauseant. The Duchesse de Langeais is present during one of his visits. 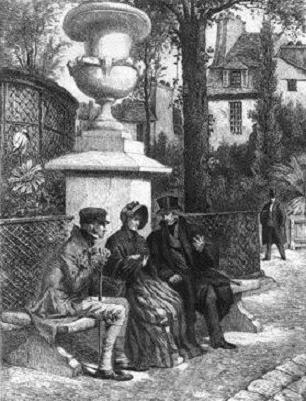 One day as Horace Bianchon (in the background) is walking through the park, he sees Mlle Michonneau and Poiret sitting on a bench talking to a man (M. Gondureau) he has seen before and pegged as a police spy disguised as an honest citizen of independent means. He later tells Rastignac that they should keep an eye on that couple.

The Grand Ball at the Hotel de Beauseant

Rastignac, now all alone, walked a few paces to the higher part of the cemetery, and saw Paris spread out along the winding banks of the Seine, where the lights were beginning to shine. His eyes fastened almost hungrily on the area between the column in the place Vendome and the dome of the Invalides, home to that fashionable society to which he had sought to gain admission. He gave this murmuring hive a look which seemed already to savour the sweetness to be sucked from it and pronounced the epic challenge: ‘It’s between the two of us now!’ 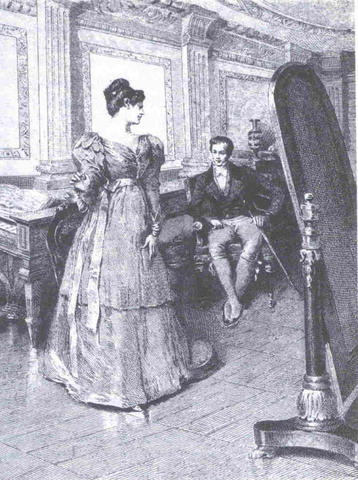 Delphine prepares for the ball.

Jean-Joachim Goriot, a self-made man, married the only daughter of a wealthy farmer. When his adored young wife died, Goriot devoted himself to his daughters, Anastasie and Delphine. His money enabled the daughters, spoiled and self-indulgent, to make good marriages. Unhappy in their marriages, both women turned to their father for money to indulge their desires. 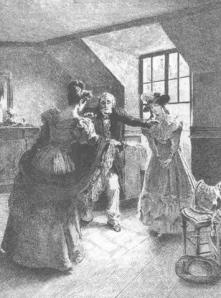 Anastasie is furious when she finds that their father spent so much on the apartment for her sister and Rastignac. She and Delphine almost come to blows and Goriot tries to reconcile them.

Madame de Restaud took her father’s hand and kissed it.

This illustration shows Vautrin and Eugene de Rastignac in the back garden of the Maison Vauquer. Vautrin, with his sword-stick over his shoulder, tells the young man of a scheme he has developed. He will find an heiress for Rastignac to marry for a commission which will be paid later. Other residents are in the background watching the two men.

The drugged Eugene de Rastignac has fallen asleep with his head on Victorine’s shoulder. As he is about to leave, Vautrin sees them.

“Good-bye, little ones!” said Vautrin, turning to Eugene and Victorine. “Bless you both!” and he laid a hand on either head.

One illustration is of the outside of Madame Vauquer’s boarding house, the main setting for Father Goriot (Le Père Goriot). It looks much grander in this illustration than described in the book. The gate, sign and statue are missing. The other four illustrations are of the dining room where the residents and boarders gather for meals.

Madame Vauquer has run a boarding House for forty years. Although very rundown and verging on squalor, Maison Vauquer has a respectable reputation. The drawing-room is depressing and reeks of the odeur de pension (boarding house smell). Yet it could be considered delicately perfumed in comparison to the dining-room which could spoil anyone’s appetite. It will seat twenty; there are currently eighteen paying for dinner, including others from the neighborhood who come partake of the cheap fare. Breakfast is casual, like family, with only the residents in attendance. END_OF_DOCUMENT_TOKEN_TO_BE_REPLACED

This masterpiece is another example of Balzac’s skill at depicting the complexity of human behaviour.  He uses a boarding house as a setting to show the deleterious impact of social mobility in post-revolutionary Paris…the irony is, of course, that all this inequity takes place after the Revolution which was meant to end it. END_OF_DOCUMENT_TOKEN_TO_BE_REPLACED